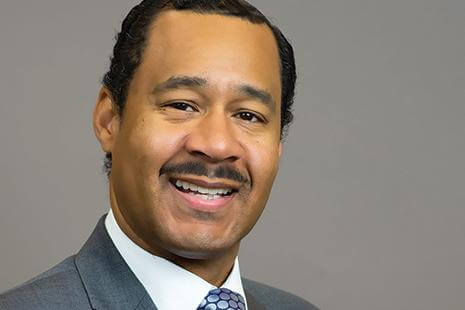 Julius C. Jefferson Jr. (BA 2003), section head of the Congressional Research Service at the Library of Congress in Washington, D.C., has been elected president-elect of the American Library Association (ALA).

As ALA president, Jefferson will be the chief elected officer for the oldest and largest library association in the world. He will serve as president-elect for one year before stepping into his role as president at the close of the 2020 ALA Annual Conference in Chicago.

Upon learning the outcome of the election, Jefferson remarked, "It is an immense honor to be elected 2020-2021 president of the American Library Association. I am both humbled and appreciative of the confidence you have demonstrated in my ability to lead ALA in the service of libraries and library workers. I look forward to building our brand, focusing on the value of library workers, and advocating for the essential work being done to support our libraries. Together we will collaborate to strengthen our core values of equity, diversity, and inclusion; advocacy; leadership and professional development; and information policy, and address the internal and external challenges. It is my vision that together we will transform ALA into a modern library association, ensuring that libraries remain at the center of public engagement and enrich the lives of the communities we serve."

An active member of ALA for 15 years, Jefferson currently serves on and has been a member of ALA Council since 2011, and most recently completed a three-year term on the ALA Executive Board (2015-2018). He has also served on a number of critical committees, including the Finance and Audit Committee (2017-2018); the Budget Analysis and Review Committee (2014-2018); the Intellectual Freedom Committee (2010-2014), serving as the 2010-2011 chair; and is currently chair of the Chapter Relations Committee, as well as on numerous other committees and task forces of the Association.

Jefferson is an active member of a number of ALA-affiliated entities, including Reforma: The National Association to Promote Library and Information Services to Latinos and the Spanish-Speaking, Library Leadership and Management Association (LLAMA), the Intellectual Freedom Round Table, the Federal and Armed Forces Libraries Round Table (which became part of the Association of Specialized, Government, and Cooperative Library Agencies, in 2018), International Relations Round Table, the Black Caucus of ALA (BCALA), and the Asian/Pacific American Librarians Association (APALA).

In addition to his service to ALA, Jefferson served on the board of the Freedom to Read Foundation (2012-2016) and served as its 2013-2016 president; served as president of the DC Library Association (2015); and served on the board of BCALA (2007-2009). He is the recipient of several awards, including BCALA Outstanding Contribution to Publishing Award (2013), BCALA Appreciation Award (2010), and Congressional Research Service Special Achievement Award (2010).

A frequent speaker on issues of importance to library workers, Jefferson has appeared on a number of media outlets, including National Public Radio. He is co-editor of The 21st Century Black Librarian in America: Issues and Challenges and is often sought as a speaker on library-related issues such as diversity, leadership, and professional development.

Jefferson holds a bachelor's in history from Howard University and an MLS from the University of Maryland.

The American Library Association (ALA) is the foremost national organization providing resources to inspire library and information professionals to transform their communities through essential programs and services. For more than 140 years, ALA has been the trusted voice of libraries, advocating for the profession and the library's role in enhancing learning and ensuring access to information for all.

A Bison congratulations on this achievement!

Read this release at ala.org.